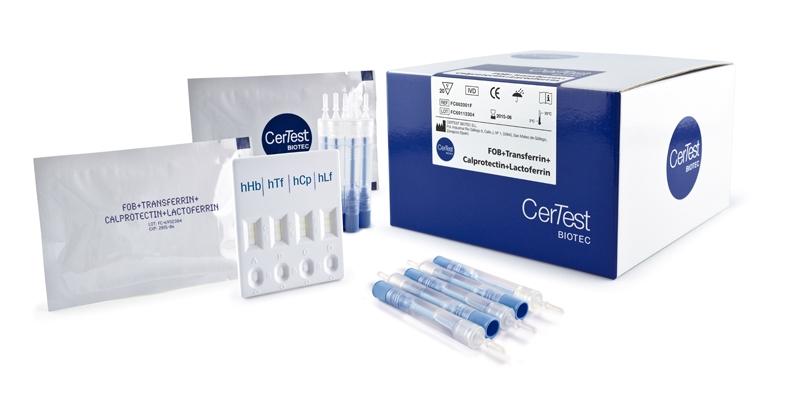 The screening using fecal occult blood tests is based on the bleeding detection, as important symptom of colonic neoplasm, either at an early-stage cancer or large adenomatous polyps. Colorectal cancer is also associated with local acute inflammatory reaction being visualized, in some cases, by white cell neutrophil scanning.

Haemoglobin is the iron-containing oxygen-transport protein in the red blood cells of all vertebrates that may be leaked into gastrointestinal tract and then discharged with the faeces in gastrointestinal bleeding diseases.

When gastrointestinal blood is lost, the stool will contain a combination of intact or nearly intact haemoglobin, intact heme, and heme-derived porphyrins in amounts that depend on the site, the amount of bleeding and the transit time through the gut. Immunochemical tests detect intact or nearly intact human haemoglobin, being a very specific technique to detect the loss of blood from the lower intestine, because blood from lower sites is less degraded during transit. The haemoglobin is unstable in faeces, leading to false negative results. The detection of fecal transferrin, which is more stable than haemoglobin, provides an alternative way of diagnosing the disease in the upper digestive tract.

Calprotectin is a neutrophil cytosolic protein with antimicrobial properties, which is present at increased concentration in stool during bowel inflammation. The stability of the protein to degradation keeps it stable in faeces for up to 7 days at room temperature, making it an ideal analyte. Calprotectin is released by activation of leukocytes, giving increased levels in plasma, cerebral spinal fluid, synovial fluid, urine or stools as a consequence of disease in the relevant organ(s). Calprotectin inhibits zinc-dependent enzyme systems, killing microbes and inducing apoptosis in normal and cancer cells. In the presence of calcium, calprotectin is a remarkably resistant to protelolytic degradation, and being stable in stools kept at room temperature for 7 days.

Lactoferrin is a glycoprotein component of neutrophil secondary granules, a primary component of the acute inflammatory response released from fecal leukocytes. This protein is resistant to proteolysis in the faeces and may serve as a marker of inflammation in the intestine. The major cause of fecal neutrophils in patients with chronic diarrhea is chronic inflammatory bowel disease of the colon (i.e., Crohn’s disease and ulcerative colitis). Lactoferrin has also been studied as a predictor of infection with invasive enteropathogens in children with diarrhea. Bacterial inflammatory diarrhea may be caused by Shigella, Salmonella, Escherichia coli enteroinvasive (EIEC) and enteroaggregative (EAEC), Campylobacter and Clostridium difficile.

The hCp and hLf markers are useful for the differentiation between functional (for example: irritable bowel syndrome) and organic disease (for example inflammatory bowel disease).