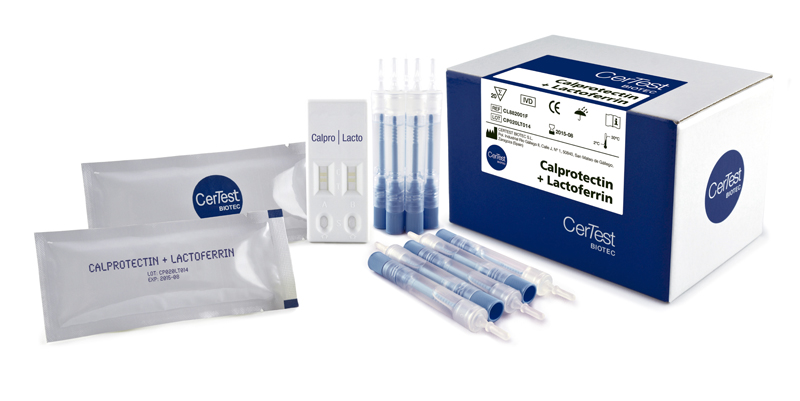 Calprotectin is a neutrophil cytosolic protein with antimicrobial properties, which is present at increased concentration in stool during bowel inflammation.

The stability of the protein to degradation keeps it stable in faeces for up to 7 days at room temperature, making it an ideal analyte. Calprotectin is released by activation of leukocytes, giving increased levels in plasma, cerebral spinal fluid, synovial fluid, urine or stools as a consequence of disease in the relevant organ(s).

Calprotectin inhibits zinc-dependent enzyme systems, as a result kills microbes and induces apoptosis in normal and cancer cells. In the presence of calcium, calprotectin is a remarkably resistant to protelolytic degradation, and so is stable in stools kept at room temperature for 7 days.

Lactoferrin is a glycoprotein component of neutrophil secondary granules, a primary component of the acute inflammatory response, and is released from fecal leukocytes.

This protein is resistant to proteolysis in the feces and may serve as a marker of inflammation in the intestine. The major cause of fecal neutrophils in patients with chronic diarrhoea is chronic inflammatory bowel disease of the colon (i.e., Crohn’s Disease and ulcerative colitis).

Lactoferrin has been also studied as a predictor of infection with invasive enteropathogens in children with diarrhoea. Bacterial inflammatory diarrhea may be caused by Shigella, Salmonella, Campylobacter and Clostridium difficile. These markers can differentiate between functional (for example: irritable bowel syndrome) and organic disease (for example inflammatory bowel disease).