Skip to content
Home/GDH + Toxin A + Toxin B + Lactoferrin

GDH + Toxin A + Toxin B + Lactoferrin 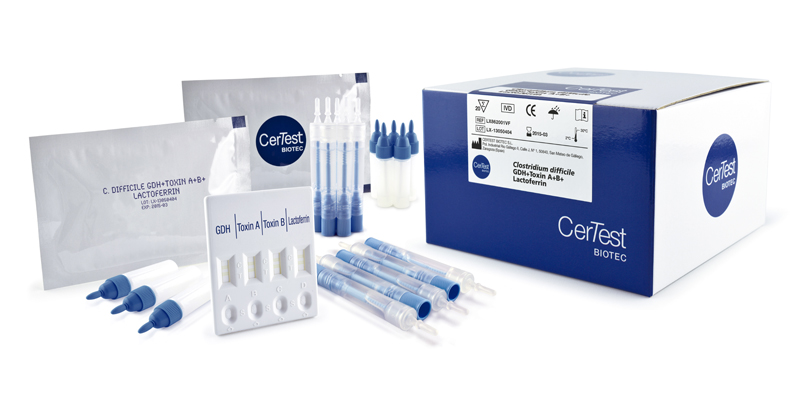 C. difficile is the most common cause of health care-associated diarrhoea in developed countries and is a major source of nosocomial morbidity and mortality worldwide.

Disease due to C. difficile develops when the organism is allowed to proliferate in the colon, most commonly after antibiotic use has eliminated competing flora. C.difficile can release two high-molecular-weight toxins, toxin A and toxin B, which are responsible for the clinical manifestations, which range from mild, self-limited watery diarrhoea to fulminant pseudomembranous colitis, toxic megacolon, and death.

Clostridium difficile Glutamate Dehydrogenase (GDH) is an enzyme produced in large quantities by all toxigenic and non-toxigenic strains, making it an excellent marker for the organism.

The toxigenic culture (TC) is used as the gold standard technique to determine Clostridium difficile infection. This method consists in culture and isolation of C. difficile from faeces, followed by toxin testing of the isolate, a labour-intensive assay to obtain a result.

Lactoferrin is a glycoprotein component of neutrophil secondary granules, a primary component of the acute inflammatory response and is released from faecal leukocytes. This protein is resistant to proteolysis in the faeces and may serve as a marker of inflammation in the intestine. The major cause of faecal neutrophils in patients with chronic diarrhoea is chronic inflammatory bowel disease of the colon (i.e., Crohn’s Disease and ulcerative colitis).

Lactoferrin has been also studied as a predictor of infection with invasive enteropathogens in children with diarrhoea. Bacterial inflammatory diarrhoea may be caused by Shigella, Salmonella, Campylobacter and Clostridium difficile.