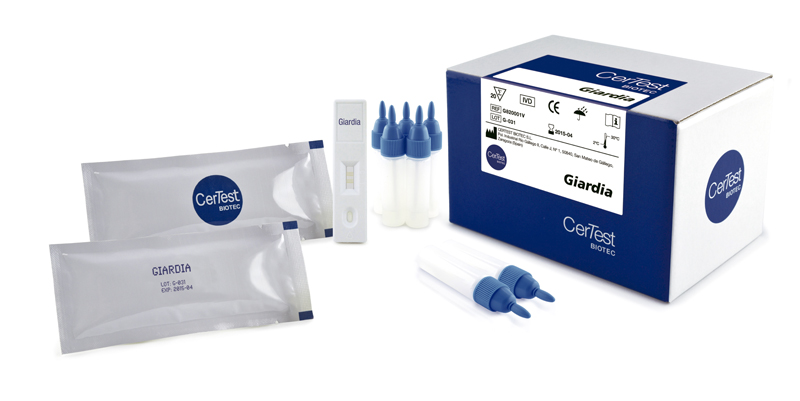 CerTest Giardia one step card test is a coloured chromatographic immunoassay for the qualitative detection of Giardia (α1-giardin and CWP1) in stool samples.

CerTest Giardia card test offers a simple and a highly sensitive screening assay to make a presumptive diagnosis of giardiasis.

Once an animal or person is infected with Giardia, the parasite lives in the intestine and is passed in the stool. The parasite is protected by an outer shell (cyst) and can survive outside the body and in the environment for a long time.

Giardia, a flagellated protozoan, inhabits the upper part of the small intestine of its host and has a two major states in the life cycle: trophozoites which produces the antigens (α-1 giardin) and cyst with produces the antigens (CWP1) After the host ingest the cysts, which are the infective stage, the trophozoites emerge from the cysts in the duodenum and attach to the small intestinal mucosa. They undergo mitotic division in the intracellular lumen, some will encyst to protect themselves and will be eliminated from the host in the feces. The trophozoite is the vegetative form and replicates in the small intestine.

In humans, the clinical effects of Giardia infection range from the asymptomatic carrier state to a severe malabsorption syndrome. Possible factors contributing to the variation in clinical manifestations include the virulence of Giardia strain, the number of cyst ingested, the age of the host, and the state of the host immune system at the time of infection.

Giardia infection has become one of the most common causes of waterborne disease in humans. The most common symptoms of giardiasis include: diarrhea, loose or watery stool, stomach cramps and upset stomach. These symptoms generally begin 1-2 weeks after infection and may last 2-6 weeks in healthy individuals. Sometimes symptoms last longer and may lead to weight loss and dehydration. Some people will have no symptoms. However, people with weakened immune systems (e.g., persons with HIV/AIDS, cancer patients and transplant patients) or
the elderly may have a more serious infection that can lead to severe illness or death.