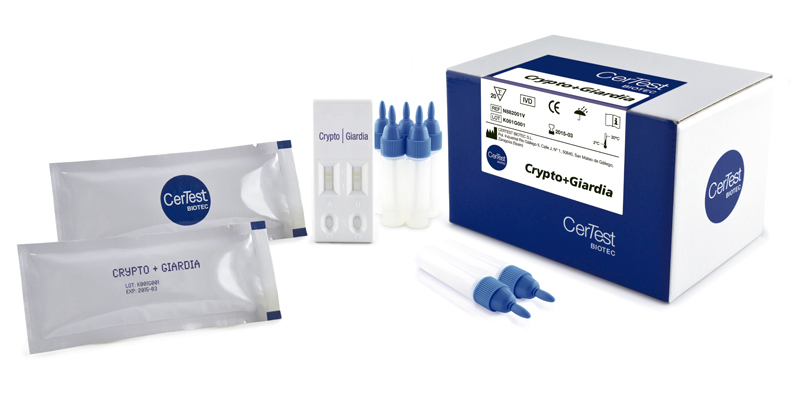 CerTest Crypto + Giardia one step combo card test is a coloured chromatographic immunoassay for the simultaneous qualitative detection of Cryptosporidium and Giardia in stool samples.

Giardia and Cryptosporidium are parasites that can be found in water.

Giardia causes an intestinal illness called giardiasis. Cryptosporidium is responsible for a similar illness called cryptosporidiosis. These infections have become the most common causes of waterborne diseases (found in both drinking and recreational water) in humans.

Giardiasis is a diarrheal illness caused by a very small parasite, Giardia intestinalis (also known as Giardia lamblia and Giardia duodenalis). Once an animal or person is infected with Giardia, the parasite lives in the intestine and is passed in the stool. The parasite is protected by an outer shell and can survive outside the body and in the environment for a long time.

The most common symptoms of giardiasis include: diarrhea, loose or watery stool, stomach cramps and upset stomach. These symptoms generally begin 1-2 weeks after infection, and may last 26 weeks in healthy individuals. Sometimes symptoms last longer, and may lead to weight loss and dehydration. Some people will have no symptoms. However, people with weakened immune systems (e.g., persons with HIV/AIDS, cancer patients, and transplant patients) or the elderly may have a more serious infection that can lead to severe illness or death.

Cryptosporidium parvum is the major cause of persistent diarrhoea in developing countries. This parasite is recognised as a highly infectious enteric pathogen and infective stage is transmitted by the fecal-oral route. Symptoms of cryptosporidiosis include watery diarrhoea, stomach cramps, weight loss, nausea and sometimes fever.