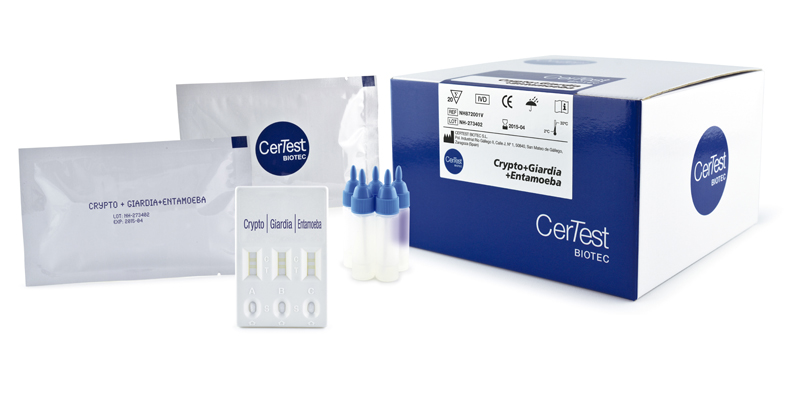 Cryptosporidium parvum, Giardia lamblia and Entamoeba histolytica are three of the major causes of protozoan-induced diarrheal disease and are the most frequently identified protozoan parasites causing waterborne disease outbreaks.

Giardia causes an intestinal illness called giardiasis. Cryptosporidium is responsible for a similar illness called cryptosporidiosis. And amoebiasis is the infection of the human gastrointestinal tract by Entamoeba histolytica. These infections have become the most common causes of waterborne diseases (found in both drinking and recreational water) in humans.

Giardiasis is a diarrheal illness caused by a very small parasite, Giardia intestinalis (also known as Giardia lamblia and Giardia duodenalis). Once an animal or person is infected with Giardia, the parasite lives in the intestine and is passed in the stool. The parasite is protected by an outer shell and can survive outside the body and in the environment for a long time. The most common symptoms of giardiasis include: diarrhea, loose or watery stool, stomach cramps and upset stomach. These symptoms generally begin 1-2 weeks after infection and may last 26 weeks in healthy individuals.

Sometimes symptoms last longer and may lead to weight loss and dehydration. Some people will have no symptoms. However, people with weakened immune systems (e.g., persons with HIV/AIDS, cancer patients and transplant patients) or the elderly may have a more serious infection that can lead to severe illness or death. Several species and genotypes of Cryptosporidum have been associated with human infections, although C. hominis (previously known as the human genotype of C. parvum) and C. parvum have been identified as the chief causes of human cryptosporidiosis. The disease is more common in young children and immunosuppressed patients, in whom it can be very serious, but it can also affect healthy people of any age.

However, in immunocompetent patient, clinical manifestations of cyptosporidiosis range from the absence of symptoms, though mild symptoms, to a severe gastroenteritis-like syndrome with watery diarrhoea.

Cryptosporidium parvum is the major cause of persistent diarrhoea in developing countries. This parasite is recognised as a highly infectious enteric pathogen and infective stage is transmitted by the fecal-oral route. Symptoms of cryptosporidiosis include watery diarrhoea, stomach cramps, weight loss, nausea and sometimes fever. The incubation period is 5 to 28 days with a mean of 7.2 days. Other symptoms include abdominal pain and fatigue.

Entamoeba histolytica, E. dispar, and E. moshkovskii are morphologically identical but biochemically and genetically different. These parasites colonize the human gut, but only E. histolytica is thought to be capable of causing disease.

Amoebiasis is the infection of the human gastrointestinal tract by Entamoeba histolytica, a protozoan parasite that is capable of invading the intestinal mucosa and may spread to other organs, mainly the liver. The acceptance of E. dispar as a distinct but closely related protozoan species has had profound implications for the epidemiology of amoebiasis, since most asymptomatic infections found worldwide are now attributed to this noninvasive amoeba. Roughly, 90% of people infected with Entamoeba infections have E. dispar. The disease may manifest itself as an acute, chronic or as an asymptomatic infection. The leading symptom is dysentery whose main consequence one galling of the colon, diarrhoea and abdominal pain. Complications of the disease may be hepatic abscesses, pulmonary abscesses or even cerebral abscesses which, if untreated, usually end in death.

Infection occurs by water pollution, vegetables, raw fruits and other food or poorly cooked or washed with infective cysts from contaminated faeces. It is possible that flies and cockroaches carrying cysts from faeces to food Amoebic dysentery occurs frequently in tropical countries but are also cases in temperate and cold areas. In Africa, tropical Asia and Latin America, more than two thirds of the population has these intestinal parasites, although most can be virtually asymptomatic infections.