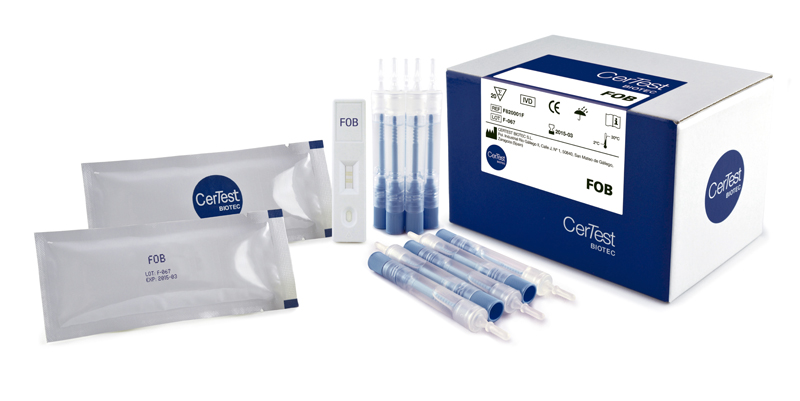 CerTest FOB one step card test is a coloured chromatographic immunoassay for the semi-quantitative determination of human haemoglobin (hHb) in stool samples.

Colorectal cancer is the second leading cause of illness and death in Western world.

The screening with faecal occult blood tests is based on the concept that important target colonic neoplasm, such as early-stage cancer and large adenomatous polyps, will bleed, for which may be detected by an occult blood test. Colorectal cancer is also associated with local acute inflammatory reaction being visualized, in some cases, by white cell neutrophil scanning.

Haemoglobin is the iron-containing oxygen-transport protein in the red blood cells of all vertebrates that may be leaked into gastrointestinal tract and then discharged with the feces in gastrointestinal bleeding diseases.

When gastrointestinal blood is lost, the stool will contain a combination of intact or nearly intact haemoglobin, intact heme and heme-derived porphyrins in amounts that depend on the site and amount of bleeding and the transit time through the gut.

Immunochemical tests detect intact or nearly intact human haemoglobin, being a very specific technique for detecting loss of blood from the lower intestine, because blood from lower sites is less degraded during transit.