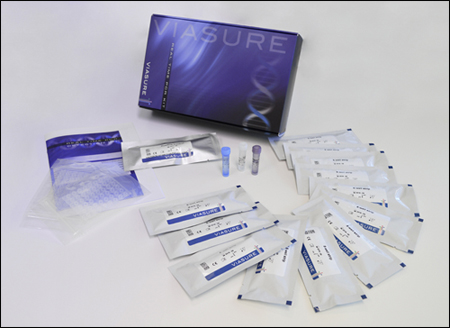 VIASURE Malaria Real Time PCR Detection Kit is designed for qualitative and quantitative detection of Plasmodium species DNA, including the main malaria species that infect humans Plasmodium falciparum, Plasmodium vivax, Plasmodium malariae, Plasmodium ovale and Plasmodium knowlesi, in whole blood samples from patients with signs and symptoms of malaria infection. This test is intended for use as an aid in the diagnosis of Malaria in combination with clinical and epidemiological risk factors. DNA is extracted from clinical specimens, multiplied using Real Time amplification and detected using specific primers and a fluorescent reporter dye probe for Plasmodium species.

Malaria is a major threat to public health worldwide in communicable diseases, since its prevalence and mortality exceeds those of any other.

Malaria is a treatable infectious disease transmitted by vectors and caused by the asexual form of eukaryotic parasites of the genus Plasmodium. It is an apicomplex of the Hematozoa class, family Plasmodiidae. The parasites are transmitted to people by the bites of infected mosquitoes of the genus Anopheles.

It is known that there are five species that are capable of infecting humans: Plasmodium falciparum, Plasmodium vivax, Plasmodium malariae, Plasmodium ovale and Plasmodium knowlesi, the latter infected only primates, but has been responsible for cases of infection in humans in Malaysia and Borneo. The two most frequent species are P. vivax and P. falciparum. P.  alciparum infection is the most common cause of severe malaria, is responsible for the majority of deaths from malaria and can cause other complications such as anemia and in children of
pregnant women with malaria, can cause low birth weight. The classic symptomatology of malaria is a triad: fever, chills and sweating, and sometimes with other nonspecific symptoms such as headache and pain in other parts of the body, without associated complications. In a few cases severe malaria is present with neurological complications or life-threatening complications.

The most severe cases (malaria tropica), usually caused by the most aggressive species, P. falciparum, usually include high fever, chills, diarrhea, headache and in a few hours can evolve into a severe condition with hepatic, renal, and coagulation disorders, pulmonary and cerebral edema, encephalopathy, coma and death. Even mild cases can quickly evolve into a deadly form, so early diagnosis and treatment are essential. The incubation time takes 7 days or more after the first exposure.

The genetic diversity gives Plasmodium the ability to evade the immune response of the host and produce variants resistant to drugs and vaccines, being this largely responsible for the  uccessful survival of the parasite in the evolutionary history, as well as the failure of the measures used with the aim of eradicating it.

Since it was first described in 1880, the diagnosis of this disease has been made by observing the different forms of the parasite in the microscopic examination of peripheral blood smears stained with various dyes. Today, this technique is still the reference method. However, the laboriousness that requires the training of a good microscopist and the difficulty of observing low parasitemias has led to the development of new, simpler but more sensitive and specific techniques. Diagnosing malaria in time can be vital for the patient, since the appearance of complications is closely related to the delay in the initiation of  reatment.