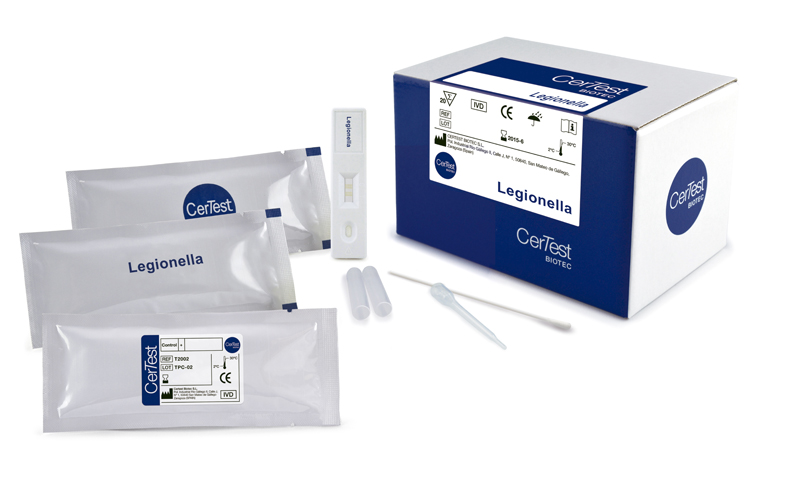 CerTest Legionella one step card test is a coloured chromatographic immunoassay for the qualitative detection of Legionella pneumophila serogroup 1 in human urine samples.

Legionnaires’ Disease, named after the outbreak in 1976 at the American Legion convention in Philadelphia, is caused by Legionella pneumophila and is characterized as an acute febrile respiratory illness ranging in severity from mild illness to fatal pneumonia.

The disease occurs in both epidemic and endemic forms and sporadic cases are not easily differentiated from other respiratory infections by clinical symptoms. An estimated 25,000 to 100,000 cases of Legionella infection occur in the United States annually. The resulting mortality rate, ranging from 25% to 40%, can be lowered if the disease is diagnosed rapidly and appropriate antimicrobial therapy is instituted early. Known risk factors include immunosuppression, cigarette smoking, alcohol consumption and concomitant pulmonary disease. The young and the elderly are particularly susceptible.

Legionella pneumophila is responsible for 80-90% of reported cases of Legionella infection with serogroup 1 accounting for greater than 70% of all legionellosis. Current methods for the laboratory detection of pneumonia caused by Legionella pneumophila require a respiratory specimen (e.g. expectorated sputum, bronchial washing, transtracheal aspirate, lung biopsy) or paired sera (acute and convalescent) for an accurate diagnosis.

The CerTest Legionella allows for early diagnosis of Legionella pneumophila serogroup 1 infection through detection of a specific soluble antigen present in the urine of patients with Legionnaires’ Disease. Legionella pneumophila serogroup 1 antigen has been detected in urine as early as three days after the onset of symptoms. The test is rapid, giving a result within 15 minutes, and utilizes a urine specimen which is convenient for collection, transport, and subsequent detection of early, as well as later, stages of disease.