Skip to content
Home/Influenza A + Influenza B + RSV + Adenovirus Resp. 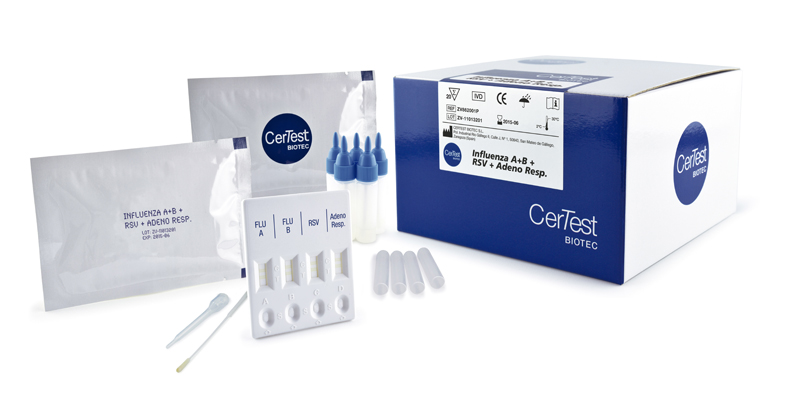 CerTest Influenza A+B+RSV+Adeno Resp. one step combo card test is a coloured chromatographic immunoassay for the simultaneous qualitative detection of Influenza type A and type B, Respiratory Syncytial Virus and Adenovirus antigens from nasopharyngeal swab, nasopharyngeal wash or aspirate specimens.

CerTest Influenza A+B+RSV+Adeno Resp. combo card test a simple and a highly sensitive screening assay to make a presumptive diagnosis of Influenza type A and B, Respiratory Syncytial Virus and/or Adenovirus respiratory infection.

The clinical presentation of infections caused by the heterogeneous group of the respiratory viruses can be very similar.

Thus, the implementation of this qualitative assay that rapidly identifies the most important viruses involved shows a great interest.

Influenza is caused by a virus that attacks mainly the upper respiratory tract – the nose, throat and bronchi and rarely also the lungs. The infection usually lasts for about a week. It is characterized by sudden onset of high fever, myalgia, headache and severe malaise, nonproductive cough, sore throat and rhinitis. Most people recover within one to two weeks without requiring any medical treatment. In the very young, the elderly and people suffering from medical conditions such as lung diseases, diabetes, cancer, kidney or heart problems, Influenza poses a serious risk. In these people, the infection may lead to severe complications of underlying diseases, pneumonia and death.

The currently circulating Influenza viruses that cause human disease are divided into two groups: A and B. Influenza A has 3 subtypes which are important for humans: A (H3N2), A (H1N1) and A (H5N1), of which the former is currently associated with most deaths. Influenza virusesare defined by 2 different protein components, known as antigens, on the surface of the virus. They are spike-like features called haemagglutinin (H) and neuraminidase (N) components.

Respiratory Syncytial Virus (RSV) is the most common cause of bronchiolitis and pneumonia among infants and children under 1 year of age.

Illness begins most frequently with fever, runny nose, cough and sometimes wheezing. Severe lower respiratory tract disease may occur at any age, especially among the elderly or among those with compromised cardiac, pulmonary or immune systems. RSV is spread from respiratory secretions through close contact with infected persons or contact with contaminated surfaces or objects.

Adenoviruses most commonly cause respiratory illness; however, depending on the infecting serotype, they may also cause various other illnesses, such as gastroenteritis, conjunctivitis, cystitis and rash illness. Symptoms of respiratory illness caused by Adenovirus infection range from the common cold syndrome to pneumonia, croup and bronchitis. Patients with compromised immune systems are especially susceptible to severe complications of Adenovirus infection. Adenovirus is transmitted by direct contact, fecal-oral transmission and occasionally waterborne transmission. Some types are capable of establishing persistent asymptomatic infections in tonsils, adenoids and intestines of infected hosts and shedding can occur for months or years.